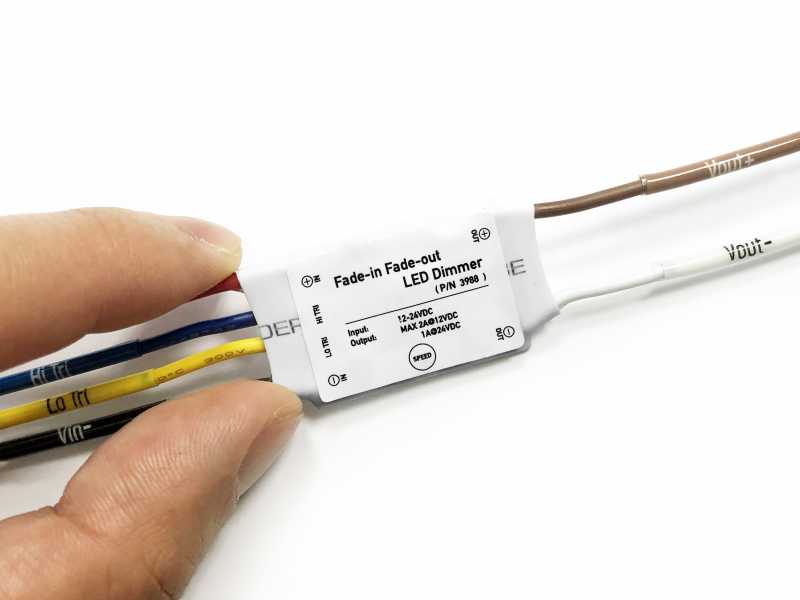 Fade-in Fade-out LED Dimmer
Q.
It works at 24Vdc power supply and +24Vdc trigger?
A.
If you are using 24v then the trigger wire would also be 24v.
Q.
I'm using an 8A on LED strip lights in a closet with a momentary contact switch. If I want to be able to control the max brightness where, and what type of dimming is possible? I tried a PWM dimmer -after- the fader but the lights initially come on 100% then dim. Can a dimmer go -before- the fader? How do you use resistors as mentioned in another answer?
A.
The fade dimmer will not work with all other dimmers. What type of dimmer do you have?
Q.
I purchased the 8 amp Fade dimmer and I am unclear as to the instructions. The + and - are clear and the wiring to the laps are clear. The module has a black (gnd) and a yellow and blue (hi and Lo) wire. I want to trigger the lights with a grounding door switch. Do I ground the thin black gnd wire and attach the blue wire to the door switch is that a gnd - trigger? and what is the yellow wire for, is that a + trigger? or just the opposite? thanks
A.
The red and black wires go to a constant power source. The blue wire would go to the door switch. The yellow wire will not be used.
Q.
Does the white -out wire have to be used? Would like to use with multifunction led strips that have their own ground.
A.
Yes, the white wire must be connected directly to the ground on the strip. The dimming happens on the ground wire.
Q.
I have two questions. I wish to use the 2A module to fade on some courtesy lights outside of my truck for the purposes of illuminating the ground in the area of the front driver and passenger doors when the vehicle's cabin lights come on. I understand the module needs constant power, and that I can choose what is the trigger, either a positive or negative going signal. In my case, the vehicle has a PWM signal that goes low to dim the cabin lights. So my question is, if the trigger is already PWM, negative going (gnd for constant on), will applying that signal to the module as a (-) trigger cause the module to be retriggered? In other-words, will the fade module be retriggered a number of times while the dome light signal is fading on, or will it ignore repetitive triggering while the module performs it's fade-in based on the time setting currently set? Another question: is the delay setting persistent across battery pulls?
A.
Yes, it should work. That said, the actual fade-on time of the courtesy lights will depend on how long the dome light signal fades on. Our module will start fading on when the dome light signal is fully on.

For example, if the dome light needs 5 seconds to be fully on and our module setting is 3 seconds, the courtesy lights will start fading on at 5th second and fully on at 8th second.
Q.
Does the LED driver have to be dimmable to use with this? Will a regular non-dimmable driver work or will it eventually break?
A.
A non-dimmable driver will work. The fading is done from the trigger wire not the driver.
Q.
I want to fade LED lights in and out continuously back and forth by themselves when 12v is connected
A.
You will need to have a switch or timer to connect and disconnect the power/trigger wire to accomplish this.
Q.
Will this work with incandescent 3 watt light bulbs ?
A.
Sorry, no. Only DC not AC.
Q.
My goal is to Fade I/O my vehicle Dome & Courtesy Lights. Are there Specific LED bulbs/strips that (handle) fading ‘Well’ vs. not ? And my vehicle has four separate door pin switches (+ I think), how is that handled in terms of Instructions ?
Thanks
A.
All of our leds would handle the application you are describing. This led is small and easy to mount: https://www.oznium.com/led-bolts-prewired-leds/led-bolt

If you can wire the door pin switches into the same circuit then everything would fade at the same time. I will look for a diagram on this.
Q.
Does this kind of controller exist for 240V lighting? I can’t find anything that suits my need for outdoor lighting running on 240V. Thanks
A.
No, that will not work. You will need regular AC lighting and components.
Q.
I would like to install footwell LED lighting in my car that is tapped into the glove box light fuse for auto on/off with fade-in fade-out.

If I wire the blue trigger wire to the fuse, and the + and - directly to the battery, will this accomplish what I want?
Additionally, if constant power is required for the + and - will this draw from the battery even when the car is turned off? If so, what is the "standby" draw?
A.
Yes, that would work. In standby current is only 25 mA.
Q.
Can I connect at the same time on the 8 amps version the two triggers:
hitrig to a WiFi relay controled switch
Lowtrig to a motion sensor.
A.
Yes, it would work.

You can trigger the dimmer by either WiFi relay switch or a motion sensor.
Q.
I bought the 2 amp version and plan to use an IR motion sensor with it. It looks like the IR switch has a pos/neg coming in the switch and a pos/neg going out. It has rca type connectors on the cables. Even though it doesn’t look like the one in your diagram, can I still use your diagram showing the yellow wire as a trigger.
A.
Yes, you can connect the IR motion sensor's neg output to the dimmer yellow wire.
Q.
To be clear this is not a PWM and does not function that way correct?
A.
It uses PWM for the dimming feature.
Q.
I have a Mercedes 2009 and want to control the Led daytime running light on a halogen headlights. Car has xenon and I will use a pigtail converter. Is this suitable?
A.
You would need to use the 8 amp version, one xenon bulb uses around 3 amps. Halogen can use up to 5 amps.
Q.
Can this be wired to the door switches in your vehicle. If so, how
A.
The input "+" & "-" of the fade-in fade-out dimmer connect to your car constant power source, and the trigger signal connect to your car door switch.
Q.
After it's switched on, can I control the brightness of the led's with the source voltage. For example, I want to use this for ambient lighting in my car, and use the dash lights as a source. Will I be able to adjust the brightness with the dash light dimmer switch, once they are switched on?
A.
What kind of dimmer switch do you plan to use along with the Fade-in Fade-out LED Dimmer?

The Fade-in Fade-out LED Dimmer doesn't work with a PWM type dimmer switch.
Q.
What is the maximum wattage the circuit can carry?
A.
2 Amp version @ 12VDC = 24 Watts
8 Amp version @ 12VDC = 96 Watts
Q.
Can this unit be configured to an rgb setup? If so please explain. Thank you.
A.
For RGB you need to use an RGB controller, some have slow fade options but not exactly like this dimmer. Most of the RGB controllers don't work with other dimmers.
Q.
When constantly powered how much wattage does the device require when not actively fading in or out?
A.
The standby current for both 2 Amp and 8 Amp models is just 25mA.
Q.
Can I run it without constant power?
I'd like to use it for indirect ceiling lighting with LED strips, but I don't have a constant power source on my ceiling.
A.
While you physically can run it without constant power, it won't function correctly.
If you don't provide constant power, your LEDs will flash briefly when they first turn on, before starting the smooth fade in. And when you remove power, they will instantly turn off (no smooth fade out).

The Fade-in Fade-out LED Dimmer needs constant power so it can be "on alert" for a signal to turn your LEDs on or off. Take for example your computer: normally you leave it plugged into the wall, and initiate a shut down process from a menu. Before it shuts down, it closes files, cleans up some cache, and safely spins down the hard drive. If you were to simply cut off power by unplugging it from the wall, it would abruptly turn off without doing these things.

There may be some creative ways to still use our Fade-in Fade-out LED Dimmer in your ceiling without installing a new power source. You could leave the Fade-in Fade-out LED Dimmer constantly connected to the existing power source, and use a wireless switch to trigger it on/off.
Q.
Can the LED be connected via a PIR sensor?
A.
Yes. Most PIR sensors use a negative output trigger, so we suggest using our 8 amp dimmer which can accept either a positive or negative input trigger. Our 2 amp dimmer will only accept a positive input trigger.
Q.
Can the fade in brightness level be adjusted externally?
A.
The fade in effect doesn't dim smoothly when using an external LED dimmer knob.
You can see the strange fade-in effect here: https://youtu.be/KR6SM4hxFuY
Q.
Can I use this circuit fader with LED downlights in the ceiling? - by Mark (Australia)
A.
Yes, as long as your LED downlights run on 12VDC and draw less than 8 amps.