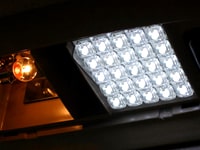 This is the real deal. A monster of a light! Choose from SIXTEEN, or TWENTY FIVE LEDs. We could have gone with 1-chip, 2-chip, or 4-chip. We went straight for the 4-chip LEDs - to give you ultimate performance and brightness.

It takes just a few minutes to install:

Question:
If I buy 1 dome light (Superflux LED or Thin Flexible), I get 6 or 8 common bases respectively.
If I buy 2 dome lights, do I get 12 or 16 common bases respectively and so on?
Answer:
Yes
Question:
Has anyone used these for a Jeep JKU...which ones and how many? - by C.Dennis (Clearwater FL)
Answer:
Not sure, it is best to measure the inside area for your domelight to see which one will fit.
Question:
My bulb reads as follows (12v8wal72) this is for my 07 FJ Cruiser the dome cap usable area is 2"x5" but very shallow, please advise if you are familiar with the FJ dome light set up , wanting the brightest red ,for not ruining my night vision. - by Bob (Mt. Pleasant SC)
Answer:
Since you said its very shallow, please check out our Ultra Thin LED Dome Light.
See more answered questions (90)

Fairly bright, but overpriced for the brightness delivered. Very reliable.

I bought a cool white 16 superflux LED panel a few years ago and have left it on for hours on end a few times with no reliability issues.
That being said, it is overpriced. Look on 2 popular online shopping sites and you'll see much less expensive 3-chip (5050 LED) panels. Most are probably not quite as bright per LED as the Oznium one, but there is 1 that is even brighter per LED and about $7 for a 5050 12-LED panel, I have to squint very hard to look directly at it, and that's with the engine off. It takes about 3.1 watts so it's rather high powered.

The Oznium LED panel is nice and bright, but it's not above the competition.
Needs 13 volts + to become really bright.
I'm not an expert on these but if they changed the resistors or current controller to give more current to the LEDs for a given voltage, it would be even brighter. the 4-chip LEDs may be able to handle it. That would be worth the price. Make the 16 LED version take a good 4 watts so at 80 lumen/watt it may give around 320 lumens of light! If, it can do that without overheating after a while.

The only possible way to justify the price may be the supposed beam angle range of the 4-chip LEDs, and possibly reliability.

I installed two of these 16 led dome light boards in the map light section of the overhead console. It really brightened it up and I can now find things when it is dark. Install took 5 minutes and everything worked perfectly the first time. Thanks gain.

I put the 25 LED superflux in my Tacoma and it is super bright, but my open door dummy light is alway dimly lit because of it. Is this a normal problem?

first off, i would like to thank oznium for their outstanding customer service. My blue 25led dome light came in the mail yesterday and i went to install it but 3 leds were burnt out. i simply came inside and reported it to customer service and within the hour my replacement was on its way. Second, it was hard to even notice that 3 of the leds were burnt out because of how freakin bright this thing is!!! amazing product! cant wait to get my replacement and install it!

I put the 25 LED cool white Superflux in my Civic's dome light. The stock bulb was super dim and kind of brown and I couldn't see a dang thing with it on. The difference is literally night and day, it's so unbelievably bright in my car now it almost hurts! (In a good way lol)Installation was a breeze. I was a little skeptical at first but after reading the reviews I went for it. So glad I did!

###
Note from Oznium.com:
Apologies about the slow shipping. We really wish it wasn't so slow during the holidays. One option is to choose UPS which offers guaranteed delivery times. We did promptly ship with USPS Priority Mail first thing on Monday morning after you ordered Sunday afternoon. Our hands are sort of tied with the post office's shipping speed during the holidays. The post office handles an insane amount of volume, and it seems their usual delivery time of 2 to 3 days goes up to anywhere from 4 to 8 days in December. The free replacement dome light did ship promptly as well. Everything working OK with that?

I bought this to replace the dome light on my RAV4, because my kids would throw things and drop things, and I needed more light. That was late 2006. The thing is great...stupid bright, and it just works. Thanks!

If you're installing this as a dome light in a car it most likely will turned on for short periods, maybe as long as 30 minutes. However, we installed it on the overhead (ceiling) of our boat and left it on continuously for days. The intent was to see if, when far away from the "land of plenty", the light would continue to work. It began to fail such that there are maybe 3 leds emitting at partial brightness and the other 22 are _very_ dim. I attribute this failure to excessive heat over extended on time.

I got the 16 LED Superflux in neutral white, to replace the incandescent bulb that came with my car, for the map light. It was a T10 wedge bulb, number 195. The 16 LED Superflux board is a much whiter white than than the incandescent it replaced, but it is only a little brighter. I have the LED board in the Left map light, and retained the incandescent bulb in the Right map light, so I can compare them side by side. The 16 LED Superfulex isn't as bright as the 14 LED, neutral white, UltraThin board, that I put in my dome light. Also, the wires could easily have broken at the board, if I was not very careful not to put any tension on them, or flex them too much. There needs to be some sort of reinforcement where the wires are soldered to the board.

I took off one star because the board was not as bright as I expected and because in an email that I received from Oznium, before ordering the board, I was informed that the Superflux board would be twice as bright as the Ultrathin board he had noticed that I had recently ordered, and it turned out that it was actually not as bright. I took off a second star because the installation was not a simple plug and play, as described in the videos. I could not use the dummy bulb. The double-sticky tape was too thin. By the way I have the same map light that is depicted at https://www.oznium.com/led-domelight#photos, in the top row, furthest to the right.

Installed 2-16 LED dome lights a couple years ago and enjoyed the improvement from stock. Installed a 25 LED in the front and moved its 16 to the back with some careful use of a soldering pencil last week. It is like daylight now, but because I got the cool whites, a little blue-CFL-fluorescent colored daylight. This thing is pretty darned cool and takes just a few minutes to install. If your car's dome light is dim this is an excellent upgrade.