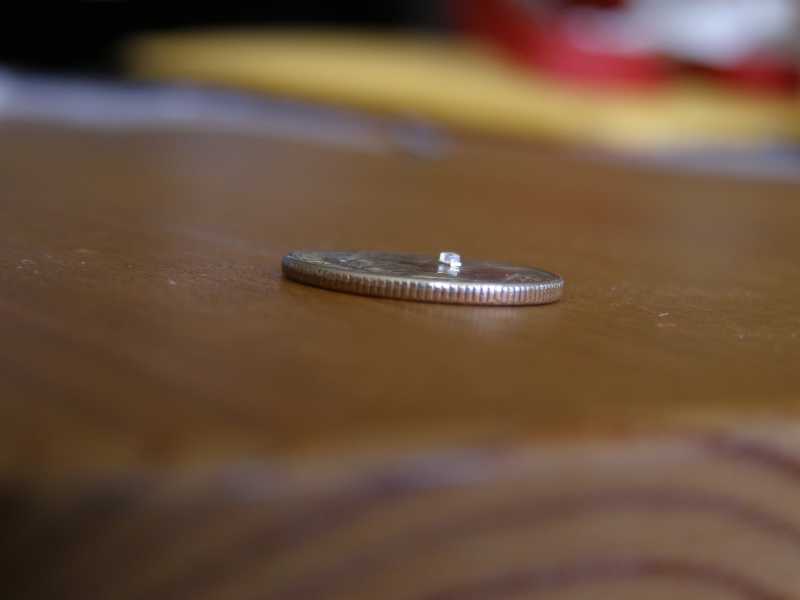 More photos
This unique LED is our smallest LED yet. It's the size of Franklin Delano Roosevelt's ear canal on the dime. You'll need tiny fingers to solder the wires for this super small LED. Or you can just use small tweezers for the soldering. You can sew these to your shirt to create awesome patterns, then wire them to a tiny battery.

This LED can also be used to change out the LEDs in your Xbox 360 console and Xbox 360 wired and wireless controller. 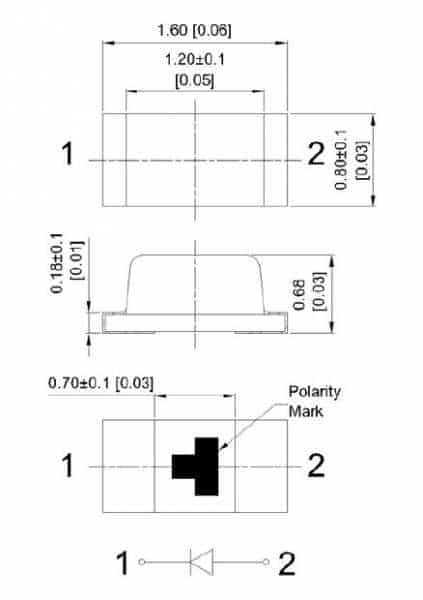 All dimension units are in millimeters with a tolerance of +- .02 mm.

Question:
I am going to use these LED's in 1:87 size cars and trucks for a HO train set. My question is I am hooking up to a 12 volt system. What size resistor should I use for the lights or do I need a resistor if they are hooked up to a watch or garage door opener battery. Thanks - by Wilson (Las Vegas, NV.)
Answer:
It depends on the color. Each LEDs will need a different voltage (either 2.0v or 3.2v). After you figure out which color you want (and voltage it needs) use our LED calculator. https://www.oznium.com/led-resistor-calculator
Question:
What is the viewing angle on these? Are they waterproof?
Answer:
120 degrees. These aren't waterproof.
Question:
If I replace a red or yellow LED with a blue LED, do I need to change the resistor?
Answer:
Yes. Otherwise it won't be very bright.

So if you swap out a red LED, and replace it with a blue LED on the circuit board (Xbox controller, car dash, etc), you will also want to change the resistor.

It is very helpful to use a multimeter / volt meter to probe the circuit board, and figure out exactly what voltages you're working with, so you can properly calculate the new resistance.

A video explaining this in more detail:

Miguel A. Rosales from Katy, TX

I bought these little lights to replace the LED's in my xbox 360 controller, I have to say, they're awesome! Shipping was fast too! I would suggest ordering 1 or 2 extras since they'll be IMPOSSIBLE to find if you drop one though its just a suggestion will post a pic of my controller. Thanks Oznium!

I got a few of these to experiment with and fix a broken power LED on a DS Lite, and decided to swap them all out instead. The colors on these tiny LEDs are vibrant and far brighter than the originals, and look great in transparent cases and controller mods too.

I ASKED AND OZNIUM LISTENED!

Thanks so much Phil for getting some 0603 LEDs. I needed a cheap place to get them for some Xbox mods.

I have previously ordered these from various sites with great results. I mod a lot of xbox 360's and even though xbox are 3v and red leds are 2v,(1v over) I have had red on my controller for 6 months and none have burned out. In fact I have never had one burn out period, and have installed nearly 100 over the past 2 years. Only thing is that they are tiny, drop one and its gone.