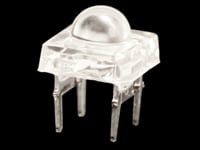 Get super bright with Superflux!

These Superflux Four Chip LEDs use a combination of four light-emitting chips inside of the diode to make it much brighter than standard LEDs with not much more cost! Only slightly bigger than a standard 5mm LED as well.

The four chip's square shape and quad leads make installing on a circuit board a simple and easy task. Make your own tail lights, turn signals, LED tubes, or more!

The superflux four chip is also more efficient than other high powered LEDs such as 1W LEDs due to their lack of heat. Four chip LEDs do not require a heat sink or other heat protection. These are also available in a pre-wired style.

Question:
Is it suggested to run these led's directly next to one another on a pcb, or would leaving at least one row of gap in between each led recommended? I'm building custom brakes and turn signals and want to make sure there's no heating or crowding issues. - by James (Cupertino, CA)
Answer:
They produce no heat so you can have them as close together as needed.
Question:
Can i use 4 simple 5mm blue led with 12v power source without any resistor.will it not harm the wires.
Answer:
I'm a bit confused. You are asking about a 5mm LED in the Superflux 4-chip LED section?? Yes four 5mm together will work without a resistor.
Question:
How many watts does 1 set use (Superflux 4 Chip LEDs)
Can they be directly connected to a 12v battery without a resistor? (On-Off switch & fuse are installed)
Answer:
80 mA, so that means 0.08 * 12 = .96 watts

The max voltage is 2.0 to 3.5 as you can see (depending on color). So you could wire them in series on a 12v battery, or use resistors.
See more answered questions (39)

Played around with these on my workbench and found with just a slight voltage increase of only .2v they will burn out in a matter of seconds. If you are going to use these on a car or bike where the voltage will go up to over 14v in charge mode, you will need to build a voltage regulator to keep the voltage from exceeding the stated voltage. For Red & Amber its 2v and that is actually the max. Similarly, at .2 volts below recommended voltage the intensity drops significantly. If you don't want to or don't know how to built a regulator, stick with the pre-made LED's with individual load resistors. For my applications that's just too much bulk.

With the correct regulated voltage they are rock solid and I plan on using a lot of them in my projects. A little pricey and require additional circuitry but worth it if you want intense lighting.

LEDs burn out after 1 month - STAY AWAY

Before purchasing the white superflux LEDs I asked the owner of the company about them and the burning out issue. He assured me that the issue with them burning out had been fixed and the new batch of LEDs were fine. This was a blatant lie. After 1 month of use (which consisted of maybe 1 hour a day) one of the LEDs flickered for a few minutes then burnt out.

If you take any pride in your work, or want your LED project to LAST - then STAY AWAY FROM THESE LEDs. OVERPRICED GARBAGE!

tried to order some from China 20leds 20resistors 10bucks

purchase a set from china assuming they would be just the same... light out put was less than half of ozniums..matter of fact the 1chip superbrights outdid the ones that i purchased from china..i think i will stick to the better quality and service for a slightly higher price....

The rated specs are great on these LEDs, however I had to seriously down the voltage to get stable output for use within my headlight housings. If looking into this mod make sure you use a 12 volt regulator (car batteries put out over 14v when running) or build your setup for 14.5volts. They get hot (120 degrees). I used my own 33 ohm resistors in a series of 3 LED's and 12v regulator to ensure lower voltage and temps. I also made small Copper heatsinks on the back of each LED to further reduce heat issues. So far so good.

I replaced my mirror turn signal LED's in my '07 tC with the white and let's just say no one will be side swiping me at night!! Also quite easy to find my car at night when I unlock it :P definitely worth the work to get rid of that awful amber

Using the Blue LEDs in a series of 4 w/o resistors. VERY bright Easy to hook up. Perfect for my installation.

I have been looking for the perfect LEDs for a custom tail light project and these are the best I've seen! Definately perfect to replace reverse lights, tail lights, side lamps, and interior lights.

All I have to say, is wow! These are bright! For a slightly higher cost, these are well worth it.