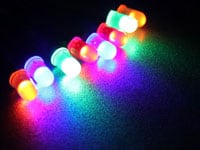 Prewired LEDs with Diffused Color Lens
Q.
inside my motorcycle head light housing unit, on both top corners (left and Right)..would u say a all time running prewired LED in RED and used as front blinkers as well would be to bright and blinding to others if always ON? and would u recommend using a defused or colored lens? thanks again...great customer service. - by Davide (MTL canada)
A.
You can tap it into the wiring of your blinker circuit and use it as a front blinker.

It certainly won't be too bright nor blinding to others if always on.

A Diffused Color lens will work fine.
Q.
What ohm resistor value would I need to make the LED pre wired, half strength - by TERRY (Waterville, OH)
A.
Half strength could mean a few things, so it should be clearly defined what you want.

For example, do you mean:
1) half the voltage/current (voltage applied to the LED and resulting brightness is not a linear relationship)
2) half the lumen output as measured by a machine
3) half the brightness as perceived by a human eye (since a human perceives brightness differently than a machine, a 1 lumen LED may not appear half as bright as a 2 lumen LED)?

Currently we use a 560 ohm resistor with these LEDs (for all colors).

The easiest solution for you may be grabbing a handful of resistors and experimenting until you find something suitable for half strength.

If you have no idea where to start, how about adding an extra 470 or 560 ohm resistor. And if its still too bright, add a few more.

See the idea at the bottom of this page where we talk about adding extra resistors to dim down an LED.

FYI: If you need 100's of LEDs, we can quickly and easily produce them for you with a custom brightness.
Q.
How do you recommend mounting these in the plastic panel in autos? I'm more interested in flush mounting, but I'm not sure how to immobilize the LED so that it doesn't pop into or out of the panel. - by Zachary
A.
You can use silicone or glue to hold them in place.
Q.
Do you have the red and green with the same lumens - by Kenneth (baltimore ,maryland)
A.
No, we only offer what is shown on the Technical Info tab.
As you'll find with all LEDs of the same style, colors like Green & White are always brighter than Red, Blue, & Amber. Its just the nature of these colors.
If you really need the lumen output to match across Red and Green colors, we can certainly try to source the LEDs for you, or custom make them, but only if you can buy 1000's.