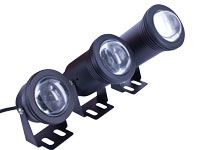 Eclipse High Power LED
Q.
I know the 10w is not waterproof, but I see some action shots of them used in exterior applications. Are they water resistant at all? Any IP rating for them?
A.
They are not very water resistant. Water can enter from the back or front of the lens. Some customers have used them outside by applying silicone around the lens and the back.
Q.
Are the non-RGB 10 watt lights dimmable?
A.
Yes, they are dimmable.
Q.
Any chance these are street legal? Getting a 20W Warm white for a Yamaha Zuma 50
A.
Should be, I don't see why not.
Q.
Which battery would you recommend for the 20 watt green light? It will be used for floundering and likely carried in a backpack.
A.
We suggest a 12V 7AH battery
Q.
what is the minimum voltage needed to power these lights? I have the 20w green eclipse led which i will use to flounder on a 12v 7 ah battery. - by Juan (Brownsville, TX)
A.
12 volts
So your 12 volt 7 amp hour battery will work great!
Q.
I would like to wire a pair into the reverse lights of my pick up, to aid my back up camera. Would this be possible? If so, do I need to use an auto relay and wire a fuse; or can I just tap into the reverse light wires? Also, can these be flush mounted?
A.
Yes, its possible. A relay and fuse it not necessary, but it certainly won't hurt. As long as your reverse light wires can handle the current draw, it should be fine. These aren't designed to be flush mounted, but there's nothing stopping you from figuring out a creative way to mount them. Go for it :)
Q.
What voltage system can the 20W green Eclipse be powered by ? Can I plug it into my 24v system - by Joseph (United States)
A.
No, 12v DC only.
Q.
Say I wanted to use this LED, but had an existing 12v 3A A/C adapter at home (I'm interested in the 20watt cool white model) what is the plug size dimensions (in millimeters) needed to properly work with this LED? - by Russell (Washington)
A.
2.1mm (or you could always just splice it)
Q.
i just bought the 20 watt rgb was wondering if the Inline RGB LED Controller - miniature, easy, simple 3-button operation would work on this? or if you can make a sugesstion on what might work better will be adding 2 more. thank you for your help - by Carlos (Houston, TX)
A.
Yes, it'll work great. Go for it!

You should also use an RGB amplifier for each light.
Q.
Hello Oznuim
I am looking to hook up 8-10 20w Eclipse LED for a landscaping job. How big of transformer would I need. And can I run 8 in parallel. - by Jeremy (ST. Louis)
A.
Each one draws between 2300 and 2800 mA depending on the color (as shown on the Technical Info tab).
So you can multiply this by 8 or 10 (or however many you want to use) to figure out how much current the adapter will need to provide.

You can of course run them in parallel. It doesn't make sense to wire them in series.
Q.
Do you recommend housing for 20 w underwater floundering application or use as supplied from company?
A.
Use as supplied!
Q.
What is appropriate battery setup for 20 watt?
A.
They use around 2.8 amps. A larger battery like a lawnmower battery or such would like you more running time. Depends on how long you need the light to illuminate.
Q.
Could you please post the physical dimensions to the 10W model? - by Lee
A.
You can find that here: https://www.oznium.com/led-flood-and-spot-lights/super-bright-10w-20w-led-spotlight#tech
Q.
I am looking for a light to install on forklifts to cast a blue beam 15 to 20 feet out on the floor to use as an early warning device that a forklift is near. How far out does this light "shoot" a beam about 24" in diameter? - by Brian (Orangeburg, SC)
A.
This would work.
Q.
does this light use a regulator? i see a very large resistor that looks like the only current limiting system in place, wouldn't this waste a lot of power? or is there a current limited regulator somewhere inside? thanks - by Ralph (Gothenburg, Sweden)
A.
Yes, of course, it uses an LED driver. The resistor is just part of the circuit. The rest of it is not visible in the photos since its behind the LED, inside the case. You're right, if all we used was a resistor, it would waste power. For this reason, and others, we use an LED driver.
Q.
Can the RGB model be fully controlled by your "Music Beat LED Controller," or is it limited to what the included controller can do? If the RGB wires do come out, is it common positive? The answer above says these are not dimmable, but the RGB controller appears to show a brightness control. Please clarify. Thank you! - by Isaiah (Montana)
A.
The RGB model can't be controlled by any other controller. It can only be controlled by the remote it comes with. Since there's already a built-in controller in the Eclipse, there's not 4 wires coming out. There's just 2: a power and ground.

These are dimmable.
Q.
Could I daisy chain the 12 volt supply line connecting to the lamp and operate a qty of 6? If so what amperage rating would I need to purchase for the 12V adaptor.

If I were to connect qty of 6, I understand they could work off of one remote, but would each rgb work independantly. In other words each rgb (led) colours would be random/different? - by Frank (Brampton)
A.
Daisy chain?
You can easily wire these in parallel. Not series.
If you don't know the difference between series and parallel, see this diagram.

The remote for the RGB/Million color style works just like a normal television remote. Suppose you had three TV's on the wall. If you pointed the remote at all three TV's, most of the time the infrared signal would "hit", and the TV's would all change at once. But occasionally, the signal wouldn't hit all TV's at once for whatever reason, and the TV's would get out of sync. If you wanted to control only one TV, you could walk right up to its infrared receiver "eye" and shine the remote at it to change just that one TV.

Same thing for these Eclipse 10W LEDs (at least in the RGB/Million style).

There is no way to sync them - no "sync" wire. It could certainly be developed, but isn't really cost effective.

The default operation is whatever the last pattern/color you set them on. There's a handful of patterns, like "flash", "strobe", "fade", "smooth".
Q.
Is this device polarity protected? - by Harold (Byron, IL)
A.
Yes
Q.
If you cut off the power supply jack, what is the color coding of the wires? - by Harold (Byron, IL)
A.
Don't know, but you could just hook it up one way, and it it doesn't light, simply flip the wires around and it will work.
Q.
with some silicone to seal them up better how would these do as driving lights?
A.
Should be nice. Give it a try.
Q.
Is the housing made of aluminum? Is the lens made of glass or plexi? - by Tom (Gainesville Florida)
A.
Aluminum & glass.
Q.
What is the UV integrity of the wire in an outdoor application?
Can the Light be removed from the mounting base? - by Robert (Madison MS)
A.
Sorry, we have no data available for the UV integrity of the wire when used in an outdoor application.
You could consider to put it in a tube if you think it will be an issue.

You're welcome to remove the light from the mounting base.
Q.
If I use multiple RGB lights in my yard for accent lighting, how do I control all of them? Also, will these all fade at the same time to the same color if hooked up correctly? If not, is there a way to synchronize them? What is the default operation of these lights? (As in your flow lighting undercar led kit, the default operation was to change to a solid color every 10 seconds or so). Thanks for the help. - by Robert (Mundt)
A.
This is all for the RGB/Million color style:

The remote for the RGB/Million color style works just like a normal television remote. Suppose you had three TV's on the wall. If you pointed the remote at all three TV's, most of the time the infrared signal would "hit", and the TV's would all change at once. But occasionally, the signal wouldn't hit all TV's at once for whatever reason, and the TV's would get out of sync. If you wanted to control only one TV, you could walk right up to its infrared receiver "eye" and shine the remote at it to change just that one TV.

Same thing for these Eclipse 10W LEDs (at least in the RGB/Million style).

There is no way to sync them - no "sync" wire. It could certainly be developed, but isn't really cost effective.