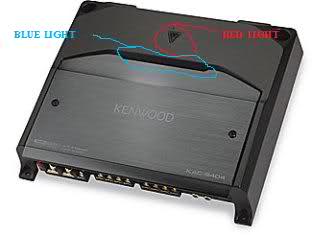 So you’re all kitted out with a new car subwoofer and amp, and all of a sudden the amp cuts out and now you’re wondering if it’s blown or simply overheated. You hope for the latter so that your new 12 inch subwoofer won’t have to be an only child, but how would you be able to tell?

Well, if you’ve blown your amp you would definitely know, it’s usually accompanied by a terrible smell, you’ll know it when you smell it. However, if there isn’t a horrible smell and it stops working or shuts down, it’s probably just overheated. In that case, let it rest before attempting to use it again, but it would probably be good idea to check out the underlying cause for it overheating.

ok so yesterday my cousin wanted to see my nwe system that i had.
its 2 12in Audiobahn subwoofers hooked up to a Kenwood 1000w amp.anyways….i was playing it at a rather good volume, but nothing too intense and then out of nowhere i cant hear anything out of these woofers.now on my amp there is a blue light, and a red light in the shape or a triangle.
well i checked it and the blue light was still on but the red light was off.he said it was just overheated so to shut them off and let them cool off.
so i did, and today when i woke up i turned them on again and still its the blue light but no red light.did they blow or what?????here is a pic…

now i am no car audio expert, but is sound like your amp went into protection mode because of the red light. now is the blue light on the amp always on or did it just come on when this happen.

ok so i found out its not blown or broken or whatever.
all it was, was the this toggle switch i had hooked up to it to shut off the amp faster and what not. and it looks kool too. hehe

anyways, it was that switch. i dont know how but thats why it wasnt turning on. once i disconnected the wires from the switch and just back together normally it worked just fine. so now i just have to turn the subwoofers on from the faceplate of my radio rather than the switch i installed for it.